It’s a brand new week and love is still blooming on Beauty and the Geek 2022. But the stakes are high with an elimination looming for one pair.

In Episode 5, there is clearly chemistry for one couple who go on their first date, but missed signals result in a potential kiss becoming an awkward encounter instead. This is followed by a shock elimination we didn’t see coming.

Catch up on the latest episodes of Beauty and the Geek on 9Now.

After gaining newfound confidence after his makeover, Mike heads over to Heidi’s room with a beautiful bouquet of flowers.

The Geek also introduces her to someone very special in his life – his Nonna – and gives her a big makeover reveal over a video call.

Nonna gives Mike’s new look a big tick of approval, but that’s not the only thing.

After the call, both Mike and Heidi can’t wipe the smile of their face and the Beauty calls it the “highlight of this whole experience so far.”

Now it’s time for a challenge. Beauties and Geeks arrive at Sydney Flight College, where Sophie reveals they will be landing an airplane. Well, not literally, but through a flight simulator – phew!

“You’ll work together as a team to fly our passenger jet to the nearest runway and safely land on the tarmac,” Sophie tells the Beauties and Geeks.

The team that successfully lands the plane and works best together will win a date and avoid being in the bottom two.

Flight attendant Emily’s early confidence soon turns into frustration after Sophie’s increasingly intrusive visits, resulting in a crash landing. Aimee and Jayden aren’t any better, nor are most of our other pairs. Except for Aaron, who draws experience as a train driver to land the plane safely.

But it’s a different story on “Mermaid Airline”, as Michael and Tara work together as a team to ensure a smooth landing.

Sophie announces them the winners – and finally, they have their first date.

“Michael is quite dashing… I’ve handled it like a pro,” Tara tells the camera.

And Michael surprises her with indoor skydiving after learning that she hates heights and airplanes.

“He really took that to heart and really figured out a great solution for me,” Tara says.

After the adrenaline rush in the skydiving chamber together, during which they held hands, they sit down for a post-dive chat.

Both Tara and Michael admit their feelings towards each other, and with some strong signals being sent in Michael’s direction by Tara, it looks like we might have another kiss of the season.

“I really wanted to kiss him in that moment. I’ve been wanting to kiss Michael for a while,” Tara tells the camera.

But Michael gets overwhelmed and misses all the signs!

“When I’m around pretty girls, I overthink everything. I was just was too in my head,” Michael says.

Meanwhile, our shyest Geek prepares to face one of his biggest fears – singing in front of people.

Jason writes a song for Emily, with the intention of performing it for her. Clearly sensing Jason’s nerves, Emily is nothing but supportive of her de ella Geek de ella, and after some trepidation he is able to sing for her.

Emily expresses her pride in him for facing his fear and assures him of his talent and bravery. 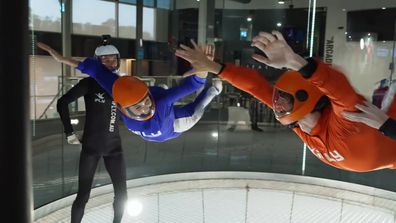 The cutest date moments so far on Beauty and the Geek

Michael and Tegan get an adrenaline rush.

“I feel really special that he felt comfortable enough to give it a go, I’m so proud of him,” Emily beams.

Jason admits that this has been a huge step forward, but he still has much to overcome.

Even though spirits are high following a somewhat successful date, Sophie must still put two teams up for elimination.

She announces the bottom two couples are Sam and Angelique and Tegan and Anthony.

Anthony and Tegan are disappointed and nervous at facing elimination once again, but feel like they had a bit of advantage having been in this situation before.

Sam and Angelique are not ready to go home yet, admitting they’ve both still got so much to learn.

“I still have so much to learn about myself, I haven’t come out of my shell yet and I don’t want that to end,” Sam reveals.

They’re tested on what they remember from their experience, what they know about each other and how well they work together. The first team to get to five points will be safe.

Sam and Angelique fail the first question and fall behind Tegan and Anthony, that is until the jellybean challenge.

It’s close, but Anthony manages to score their fifth point and wins the elimination quiz.

READMORE: Angelique’s quirkiest moments on Beauty and the Geek

Which means Sam and Angelique’s time has come to an end. It’s an emotional farewell for the couple, who intend to continue their romantic relationship on the outside.

“Knowing that this is the end of my experience, but the best part was meeting Sam. I’m excited to see where the relationship goes,” Angelique admits. 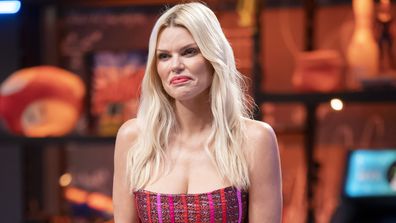 All of Sophie Monk’s best looks

The host stuns in a red dress.