During a small dinner get-together with friends at the residence of TV executive Law Tan three months ago, cruise connoisseur and globe-trotter Keren Pascual asked if we would be interested to join him on the Celebrity Beyond cruise.

I have explained that it was the newest cruise line and had just opened this year. The one he planned to go on was the Mediterranean cruise, which was to sail from Rome on July 11 for Greece and Malta, and then dock in Barcelona on July 21. Keren’s description of the cruise got me very excited, especially the part about Greece which would take us to Olympia, Rhodes, Santorini, Mykonos and Athens. I’ve never been to Greece and the thought of spending 10 nights aboard a luxurious ship was very tempting. Thanks to Keren’s “sales” pitch, Leo Katigbak (head of ABS-CBN archives and film restoration) and I were in.

Since this was going to be my first trip out of the country since the lockdown began in March 2020, there were lots of requirements to deal with. I needed to get a booster shot, apply for the yellow card from the bureau of quarantine and a Schengen visa, book plane tickets, hotel rooms and our cruise, and lastly, prepare our itinerary. I was so excited for my first revenge travel, I requested a three-week vacation leave from my bosses.

On July 7, Keren, Leo and I flew to Rome and spent three nights there. We even hired a Pinoy driver, Ken Avelino, to drive us to Florence for a day to visit San Gimignano and Siena, two very quaint towns a couple of hours from Rome. On Sunday, July 10, we attended the 9 am mass at the Vatican and then spent the rest of the day strolling through the streets of Rome.

The day after, on July 11, we asked Ken to drive us to the port in Civitavecchia where the Celebrity Beyond ship was waiting for its passengers to board. The ship was certainly a sight to behold, its impressive, brand-new exterior imposing and beckoning. Checking in was a breeze since we did most of the prep steps online, including tagging our own luggage. As soon as we got inside, all three of us couldn’t help but be awestruck and amazed as the ship was breathtakingly beautiful. The interiors were tastefully designed by world-class interior designers, and one deck even had two Kenneth Cobonpue chairs handsomely displayed!

According to the website, the Celebrity Beyond has 21 decks and can house 3,260 passengers and 1,400 crew members. Its captain, Kate McCue, is the first female captain to steer a cruise liner.

When I got to my cabin (we each had our own), I saw that the interiors were very modern with their muted gray and white color motif. The bathroom was surprisingly quite spacious, and came complete with hotel-like amenities. I was especially excited that I could order room service and have a meal overlooking the ocean from the infinity verandah. Other notable features were the remote-controlled blinds, the ultra-comfortable bed, mini bar, the large screen tv with a good selection of tv shows, movies and live news channels from BBC, Fox News, NBC, etc.

After I unpacked and took a shower, Keren, Leo and I decided to explore the ship before deciding where we would have dinner. And boy, were we impressed when we saw what the ship had to offer! There are eight dining areas open to all passengers, and seven specialty restaurants that charge. The Overview Café is where all the eating action is. It has been christened “Eataly” because of the wide selection of food and beverages and is open all day for breakfast, lunch and dinner. 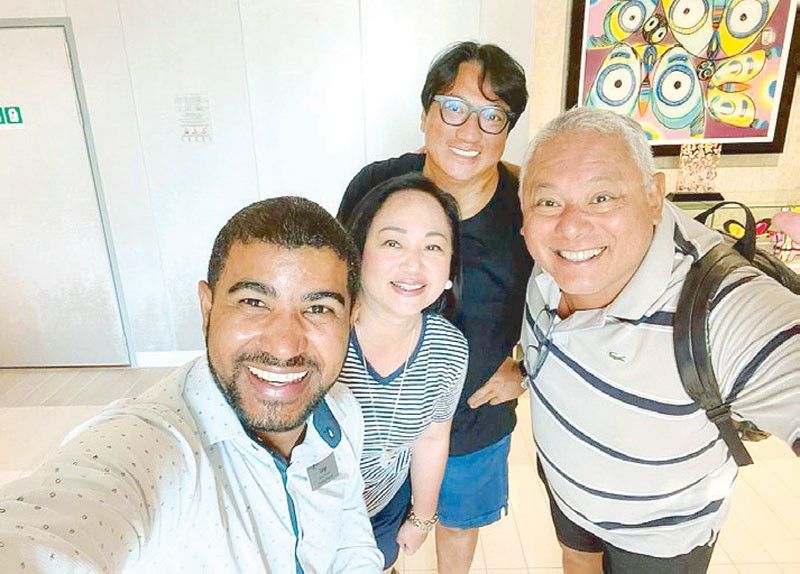 The three cruisers: Keren Pascual, Leo Katigbak and I with social director of Celebrity Beyond, Luigi Del Mar.

To me, what was jaw-dropping was the “Magic Carpet Ride” area, which is a 2,100 square foot multi-use space that hovers over the open water. Designed by Tom Wright, the same architect behind the Burj Al Arab Hotel, it is like a giant elevator that can go up and down 10 stories. During the day, it’s on deck 14, where passengers can lounge and take in the water views. At night, it’s lowered down to the fifth deck where it transforms into a bar where patrons can enjoy live music. If you’re lucky, you can even catch a magical sunset.

The resort deck on the 14th level is where you will find the 75-ft. main pool, and the Solarium pool, which is enclosed in a glass dome and for the exclusive use of adults. It is also here where you will find lots and lots of lounge chairs where you can rest and soak up the sunshine while enjoying ocean views.

Leo was also raving about the full-service gym on deck 15 with state-of-the-art equipment enough to accommodate 40 people at any given time. The spa also has tanning and rejuvenation rooms, massages and five different saunas to choose from.

Entertainment on board is also fantastic. At any given time, there are roughly 60 activities to choose from, including musical shows, dancing, a piano bar, magic shows, crafts tutorials, art exhibits, movie screenings, recreation sports activities like ping pong, water volleyball, etc. Even the theater — which can seat 500 people — is state-of-the-art, with its hydraulic multiple stages and 110-foot curved LED wall.

On our second night, as we were waiting to catch the theater production entitled Stage Door, Captain Kate McCue appeared and introduced herself and her executive officers to the theatergoers. She called the ship a “pandemic baby” since it was constructed during the two-year lockdown to the tune of $1.3 billion, and went on its maiden voyage only three months ago in April 2022. Capt. Kate, 44 years old only, is a dynamic and decorated captain and a very pretty one, too! She reminded me of Sandra Bullock! The luxury ship is proud to have a dream team of icons behind it, including multi award-winning interior designer Kelly Hoppen CBE, global culinary ambassador chef Daniel Boulud, and well-being advisor Gwyneth Paltrow.

For me, though, it’s the service that is impeccable. It’s like you’re checked-in at a five-star hotel where food is available 24 hours a day and the staff is very helpful, cheerful and courteous. My cabin is cleaned twice a day by Alan Adan, a Filipino who has been working for 13 years on a cruise ship, and who leaves me chocolates every night when he turns down my bed.

According to Charles, one of the Filipinos assigned in the concierge, there are more than 200 Filipinos on board the Celebrity Beyond, whose crew is composed of over 70 nationalities serving on board. And since Filipinos dominate the number of crew members, we were able to request them to prepare us a Filipino meal on our second to the last night. They surprised us with shanghai lumpia, sinigang na hipon and beef tapa with garlic rice! It was so comforting to have Filipino food after more than two weeks even though Keren, Leo and I were probably the only Filipino passengers at the time.

From what I observed, the passengers were mostly Americans, Latin Americans, Europeans and a very small number of Asians. Age-wise, I saw lots of families that were traveling with babies and teens, and lots of couples-only vacationers, too. It was a nice mix of old, middle-aged and young people.

My only regret was not taking my children with me. But then again, isn’t that the perfect excuse to go on another cruise next year? As social cruise director Luigi Del Mar says every night, the cruise life is back and for me, it’s so liberating!