The XPS 13 Plus is one of the boldest laptops I’ve ever seen. It’s like Dell sent a computer back in time from the future, Terminator-style. It has a keyboard that stretches from edge to edge, with no gaps between the keys. The haptic trackpad is hidden underneath the wrist rest, and the capacitive function key row keeps things looking clean, without the annoying shape-shifting keys from Apple’s Touch Bar.

With all of those features, and the most computing power ever in a 13-inch Dell ultraportable, the XPS 13 Plus should be perfect, right? Well, not remove. It’s an admirable achievement, but it also feels like Dell’s designers emphasized style over usability. 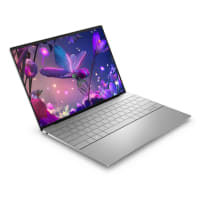 Take that haptic trackpad, for one. When I first got my hands on the XPS 13 Plus last December, I was both floored by its unconventional touchpad design and worried that it could lead to headaches. It’s definitely intriguing: When the computer is on, the piezo motors in the trackpad area deliver the sensation of clicking without moving at all. But when it’s off, the wrist rest is just a silent slab of Gorilla Glass.

Of course, haptic trackpads aren’t new. Apple’s been using them for years, and they’ve finally started popping up in other Windows laptops like the Surface Laptop Studio. Technically, they can make laptops more reliable since they can’t trap gunk like normal trackpads. But on the XPS 13 Plus, that technology feels even stranger. There’s no easy way to tell when you’re in the trackpad zone without pressing down or looking for a moving mouse cursor. With other notebooks, you can feel a clear difference between the trackpad and wrist rest. That’s not something we think about often, but it goes a long way toward making us feel confident as we browse the web or scroll through documents.

On the XPS 13 Plus, just right-clicking often feels like trial and error. Is my finger too far to the left? Too much toward the right? Doing something so simple shouldn’t be frustrating, especially not with a laptop that’s meant to represent the future of computing design. The invisible trackpad basically feels like a party trick: something that can impress your friends but will mostly make your life harder. Even after using the XPS 13 Plus for a week, I still find myself missing the trackpad often, especially if I try to do any complicated finger gestures.

The XPS 13 Plus’s keyboard is far more successful. It spans the entire width of the computer, and it has practically no gaps between the keys. We saw something similar on HP’s 2019 Specter x360, but Dell’s machine goes even farther to the edge. The result is something that feels luxurious to type on — finally, my large hands can spread out like they do on a desktop keyboard. It would be nice to have more than just a millimeter of key travel, but the overall typing experience still feels responsive.

After seeing the trackpad’s haptic functionality in action, it’s not hard to imagine future keyboards using similar mechanisms to deliver a deeper typing sensation. That technology could also help the XPS 13 Plus’s function row feel a bit more like traditional keys while still being covered under Gorilla Glass. I didn’t mind the capacitive function row — at least the keys stayed in place, unlike the Touch Bar—but I wish it was more visible outdoors. It tends to get washed out in direct sunlight, or if you’re wearing sunglasses. (One Engadget staffer has also had to replace the capacitive function keys on his ThinkPad Carbon X1 several times. That could be a sign of Lenovo’s build quality, or it could point to capacitive buttons not being very durable.)

Aside from these features, the XPS 13 Plus mostly looks like a typical XPS 13 when it’s closed. There’s the machined aluminum case, which looks as premium as ever and feels plenty sturdy. If you look closely, you’ll notice there’s no headphone jack, just two Thunderbolt 4 USB-C connections on either side. That’s something Dell also removed from this year’s XPS 13, and it remains a baffling decision. And no, I don’t think the new quad-speaker array makes up for that (it sounds fine, but it’s nothing miraculous).

While Dell includes a USB-C to headphone adapter in the box, along with a Type-A adapter, there’s no way to charge the computer if you have those both plugged in. If Apple can squeeze a 3.5 millimeter jack in the new MacBook Air, which weighs the same 2.7 pounds as the LCD-equipped XPS 13 Plus, Dell really has no excuse. (The OLED model is quite heavy at 2.8 pounds.)

While we’re talking about screens, if you want to get a 4K or OLED screen in an XPS this year, the 13 Plus is your only option. The standard XPS 13 only has 1080p LCD options. Our review unit is equipped with the 3.5K OLED touchscreen model, which offers a decent 400 nits of brightness. It looks as great as all the other XPS screens we’ve seen, with excellent color and deep black levels, but I’m more curious to see how the 500-nit 4K OLED variant performs. Our review model’s display was just fine outdoors, but a bit more brightness would make it look better in direct sunlight.