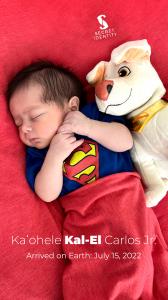 Luckily, Krypto helped Kal-El sleep through the movie so his parents and sisters could enjoy it.

We ask each person that donates who they think would win in a fight, Superman or Black Adam. We will announce who the people think would win on BlackAdamFitnessChallenge.com on October 21st.”

CHICAGO, IL, USA, July 29, 2022 /EINPresswire.com/ — At just under 2 weeks old, Kaʻohele Kal-El Carlos Jr. saw his first movie, DC League of Super-Pets, at an early Thursday screening with his sisters Leialoha Batgirl Carlos 8, and Kara Zor-El Carlos, 6. Together, they are settling the Superman v Black Adam debate through their $100K the Make-A-Wish fundraiser at BlackAdamFitnessChallenge.com.

“We ask each person that donates who they think would win in a fight, Superman or Black Adam” explains Leialoha. “At the end of the fundraiser on October 21st – when Black Adam comes out – we will announce who the people think would win on BlackAdamFitnessChallenge.com.”

Dwayne Johnson, who voices Krypto in DC League of Super-Pets and is bringing Black Adam to the big screen, had the following to say when asked at Comic-Con if Black Adam could defeat Superman in a fight: ‘Well, I will say , as you guys know, because we’re all in deep with this mythology, and it’s been an age-old question of who would win a fight between Black Adam and Superman. Pound for pound, they’re pretty close. I guess it probably all depends on who is playing Superman; I’m just going to say that. I’ll leave it at that.” In a follow up interview, Johnson called Henry Cavill the Superman of our generation.

“I think my brother Kal-El is the Superman of our generation” retorts Kara.

Kal-El’s first ever movie was captured on video by their dad and can be seen at: https://www.instagram.com/p/CgmfAN6JKdo.

To assist with the Black Adam Fitness Challenge fundraiser, the Carlos sisters will be giving away free ZOA and lemonade this Sunday, July 31st, at the corner of Stevenson Ranch Parkway and Holmes Place in Stevenson Ranch, CA from 4 – 7 pm. In addition to raising funds locally in their community, they are raising funds at BlackAdamFitnessChallenge.com with a goal of reaching $100K before the Black Adam movie, helmed by Dwayne Johnson, releases on October 21st.

“As Hawaiians, my daughters and I have a great sense of pride in seeing other Polynesian people reach great heights in their careers” emphasizes their dad, Kaʻohele Carlos, who leads the Core Experience Team for Amazon’s Prime Video streaming service (https:// www.linkedin.com/in/kaocarlos). “El’s most inspirational part of his success is that Johnson has remained grounded and connected to his ʻohana throughout his illustrious career.”

ʻOhana, the word for family in Hawaiian, is top of mind for Mr. Carlos. Kaʻohele Kal-El Carlos Jr., was just born on July 15th at 4:05am PST. “I am feeling extremely lucky to have healthy children and a very understanding wife who let me name all of them” admits Carlos. “We call our son by his middle name, Kal-El, which is Superman’s real name from Krypton. Leialoha has the middle name Batgirl. Kara has the middle name Zor-El. Kara Zor-El is Supergirl’s real name from Krypton. My wife happens to be named Diana, which is Wonder Woman’s secret identity.With a Batmobile (https://youtu.be/_Mz6srk2e2w) and a Batcave office (https://youtu.be/_1TdWsHi4FE), I am Batman to complete our super family.”

The $100K fundraiser for Make-A-Wish at BlackAdamFitnessChallenge.com is an effort to build an online fitness community to support each other and the causes the group is passionate about. “One of the reasons I started the Black Adam Fitness Challenge was to get my daughters into fitness as a way to bond. Being from Hawai’i, having a strong familial support system is essential to my well-being.” conveys Carlos. “As an example, I was on the island of Hawai’i to be with my dad who recently passed and a friend suggested that I stop by Ken’s House of Pancakes to give aloha to Aunty Debbie while in Hilo. While talking story with Aunty Debbie , I learned that she also had a parent in the hospital and we had the opportunity to console each other. I also learned that she is ʻohana with my friend Sri. When I texted Sri about Aunty Debbie and told her about my son, she let I know that her daughter Rain’s baby is doing great and that her daughter Sade is also expecting. I am looking to build this same level of interconnected support for my existing and new fitness friends. In fact, while I was at the hospital, my HIIT coaches, Diana, Steven and Amanda, jumped in to create #BlackAdamFitnessChallenge videos including Coach Amanda’s amazing cosplay fitness videos which can be seen at https://www.instagram.com/blackadamfitnesschallenge.”

Kaʻohele Carlos currently leads the Core Experience Team at Amazon’s Prime Video streaming service. To stay connected with his Hawaiian culture and his home of Hawai’i, Mr. Carlos created a lifestyle brand at PIDGINMOJI.com. PIDGINMOJI, the official sponsor of the Black Adam Fitness Challenge, is looking to expand into fitness apparel with SECRET IDENTITY shirts that reveal your superhero logo when you work up a sweat.


EIN Presswire’s priority is source transparency. We do not allow opaque clients, and our editors try to be careful about weeding out false and misleading content. As a user, if you see something we have missed, please do bring it to our attention. Your help is welcome. EIN Presswire, Everyone’s Internet News Presswire™, tries to define some of the boundaries that are reasonable in today’s world. Please see our Editorial Guidelines for more information.