Silverwoods, a New Jersey independent living facility, seems an unusual place for Audrey and Joseph to hold their engagement party. Even more so when you learn Audrey is an Afghan Hound, and Joseph is a Doberman Pinscher. The gala gathering brought joy to the residents and the betrothed dogs’ pet parents.

Both pups are therapy dogs and titled in many AKC performance events. Audrey, a four-year-old tall, leggy brindle Afghan Hound heart-throb belongs to my friend Annette Smith from Toms River. When she surfaced in a Florida shelter as a pup, Annette arranged to bring her to NJ with the help of breed rescue contacts in Florida who kept Audrey until her scheduled transport from her. It didn’t take long for her breeder to recognize Audrey on social media. Audrey comes from top show lines and was sold as a pet because she was too tall to show. Her owners of ella violated their contract of ella by not contacting the breeder before surrendering her to a shelter. Audrey’s breeder is thrilled that her pup de ella wound up in the best of homes, and marvels at Audrey’s many accomplishments de ella. 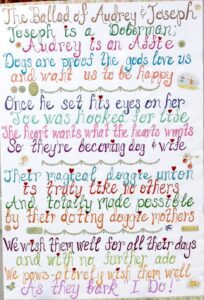 Joseph, a two-year-old Doberman, has a remarkable performance record for such a young dog. He belongs to Lisa Clowes of Forked River, NJ. Joseph and Audrey met in rally class at their school -Clever K9s. It was love at first sight. They adore each other. Joseph plays with Audrey and her two rescued Afghan siblings. He thinks he is an Afghan Hound disguised as a Dobie. Yes, Joseph is marrying an older and taller woman.

The pups announced their engagement last October, and their wedding is set for September 10th on the water at Riverfront Park in NJ. It will be a catered event with an organist playing at the ceremony. Audrey’s sister Sarah will be Maid of Afghan and her de ella Afghan brother Hermie is best man. Joseph’s sister Lyla, a 13-year-old Dobie, is a flower girl, and Afghan friend AJ is the ring bearer. Despite becoming Mr. and Mrs., the couple will continue to live with their respective pet parents. Their engagement party was much more than a warm-up to the wedding. 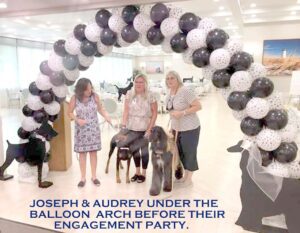 Dog Engagement Party: Both pups visit Silverwoods in Toms River as therapy dogs, alone and together. Their engagement party lasted three-and-a-half hours. The first hour was spent in the community room as a meet n’ greet with the senior citizens, getting reacquainted. Their moms talked about the canine couple’s love of working with people and answered questions about their neutralized dogs’ romance and fondness for performance events.

Karen Calandriello, the activities coordinator at Silverwoods, is Annette’s longtime friend. Together with Lisa, they hatched the idea of ​​combining a residents’ musical activity with their therapy dogs’ engagement party.

The bride-to-be wore a gold crinoline dress and head piece, and the groom a white silk bowtie. More than 50 people at Silverwoods in Toms River helped the betrothed canine couple celebrate their engagement at this gala event on July 27th. 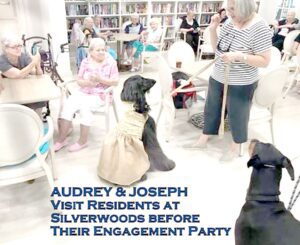 The entrance to the banquet room was decorated with a huge balloon arch anchored by wooden Afghan and wooden Doberman silhouettes, and centerpiece vases filled with tennis balls holding the flowers. Annette’s sister Alberta DiPaolo (a retired English teacher) wrote the poem on display about the upcoming pup nuptials.

Wild Rose Band, a husband-and-wife saxophone and percussion duo, entertained the crowd and serenaded Audrey and Joseph. The sax player announced that Audrey dedicated Frank Sinatra’s “L is for the Way You Look at Me” to Joseph, while Joseph dedicated Elvis’s “Hound Dog” to his special Afghan Hound lady. The dogs danced with their moms and mingled with the guests.

During the luncheon, the dogs and their parents sat away from the rest at a dais, similar to a real wedding party, and this table also separated the pups from the serving of food. No one tapped their glasses for the couple to kiss. Good thing because no one noticed that Lisa let Joseph rest in his crate strategically placed behind the day for a short while during the meal, so he’d be refreshed to finish celebrating during the dessert and coffee.

Audrey’sTitles: Audrey is officially Audrias RAS Ahead of Storm, JC CAA CGC TKN ATT FCAT. This means she has AKC titles for being a junior courser, coursing ability advanced, canine good citizen, trick novice trick dog, temperament aptitude test and Fast Cat with 1,000 points earned at AKC events. All acquired during the two years she has lived with Annette. When lure coursing, the dog chases a mechanically operated lure over a long, twisting path, whereas Fast Cat is a 100-yard dash where the dog’s time is converted to speed in miles per hour.

Joseph’s Titles: Audrey’s fiancé’s official name is Jaroe Derby Lucky Debonair RN CAA CGC ATT FCAT TKI DMX. In addition to the titles he shares with his future bride, Joseph earned a RN-rally novice, TKI-intermediate trick dog (which is one step above Audrey’s TKN) and DMX-dock master excellent. Joseph is a top dock diving dog. His best distance dive from him was 24 feet four inches. He is the #3 dock diving Doberman in the country, even though he doesn’t have a pool in his backyard. He will soon start another dock diving event called air retrieving.

Dock diving brings us to the canine couple’s wedding night. This won’t happen because Joseph has to leave his wedding early. The wedding date was booked before Joseph was invited to the regional dock diving competition in Connecticut which happens to fall on September 11th, the day after their wedding. Joseph and his parents have to go home and get as much sleep as possible. They must leave at 2 am to be on time for the regional contest that starts at 8:30 am Please don’t whisper a word about this to ditched-at-the-altar-Audrey.