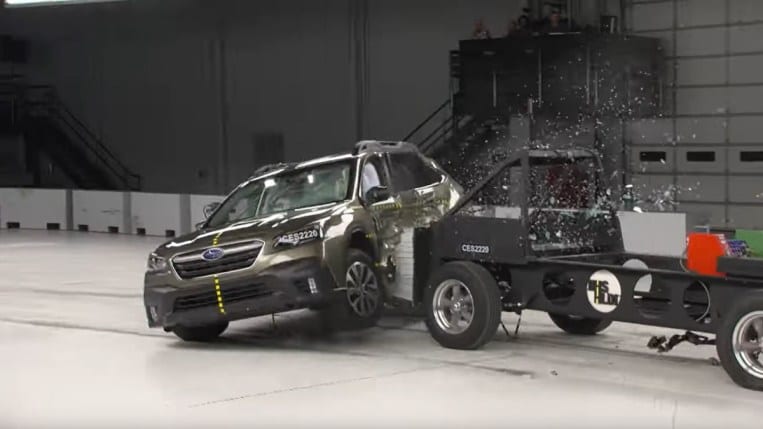 One of America’s two crash testing organizations performed side-impact crash tests on a slate of midsize cars, and only one earned a score of “Good.” Some important background information makes that news a little less scary than it sounds. But only a little.

One is the federal government’s National Highway Traffic Safety Administration (NHTSA). Automakers must provide cars to NHTSA for testing before companies can legally sell them in the US But NHTSA was not responsible for this round of tests.

The Insurance Institute for Highway Safety (IIHS) is America’s other car safety lab. It is arguably the more thorough of the two.

A group of insurance companies funds the IIHS. Your insurance company has a financial interest in making car accidents rare and minimizing the deaths and injuries that can occur when accidents do happen. So a consortium of car insurers funds its own separate safety lab.

Related: Car Safety Features 101 – Everything You Need to Know

When NHTSA wants to adjust one of its tests, it must go through a lengthy public comment period that usually involves negotiating with automakers. It’s a long, bureaucracy-soaked process. So changes to NHTSA testing are relatively rare.

When the IIHS wants to adjust one of its tests, it can act much more quickly. So it routinely makes its tests harder.

Crash Tests That Account for the Increasing Size of SUVs

The IIHS is operated by a consortium of America’s largest car insurance companies. They have a lot of data on car crashes, and they’ve recently concluded that their side-impact crash tests need to change.

In the old crash test, the IIHS crashed a 3,300-pound sled, shaped like the front end of a typical midsize pickup or SUV in the 1980s, into the driver’s side of each vehicle at 31 mph. It rated cars as Good, Acceptable, Marginal, or Poor based on how well they protected two dummies representing average women — one in the driver’s seat and one in the seat directly behind the driver.

But trucks and SUVs have grown taller since the 1980s. SUVs now outsell cars and trucks combined. Increasingly, if you get hit crossing an intersection, you’re likely to be hit by something both heavier and taller than the old crash test sled.

Americans are also driving faster than we used to. Speeding tickets, risky driving, and fatal crashes have all spiked in recent years.

So the IIHS adjusted its tests. It now uses a 4,180-pound weight moving at 37 mph, shaped like the front of a typical midsize truck or SUV today. “As a result of these changes, the new test involves 82 percent more energy than the original test,” the IIHS says.

The agency released its first round of crash tests with the new standard last October. The results were discouraging. Of 20 small SUVs subjected to the new test, just one — the 2021 Mazda CX-5 — earned a rating of “good.”

The Latest Round of Tests

This time, seven midsize cars made up the test group. All seven earned a rating of “Good” in the institute’s old side-impact test.

Since they’re larger and heavier than the small SUVs of the last round, some hoped they’d perform a little better.

They didn’t. They performed worse. The IIHS explains, “Overall, this initial group of midsize cars did not perform as well as the first batches of small and midsize SUVs evaluated earlier. One reason could be their lower ride height.”

Their lower height means the crash test hits much higher on the door. “That potentially puts sedans and wagons at a disadvantage in this evaluation,” says IIHS President David Harkey. But it “reflects what happens in a real-world crash when these vehicles are struck by a higher-riding pickup or SUV,” he notes.

The only vehicle to score a “Good” rating in the new test is the 2022 Subaru Outback, a higher-riding wagon. The Outback Is Out Of Place In This Group

The Outback may have outperformed the others for a simple reason — it’s out of place in a group of sedans.

The Outback has its origins in a midsize sedan. It was once a variant of the Subaru Legacy. But these days it resembles an SUV more than it does a sedan. The Outback has a full 8.7 inches of ground clearance — well over the 5.7 of the Camry or the 4.6 of the Malibu.

The Outback’s much higher position means the test sled hits it lower on the door, so the test dummies’ heads are in a better position for the side-impact airbags to do their job.

Consider this screenshot from the Institute’s video of the Outback test: 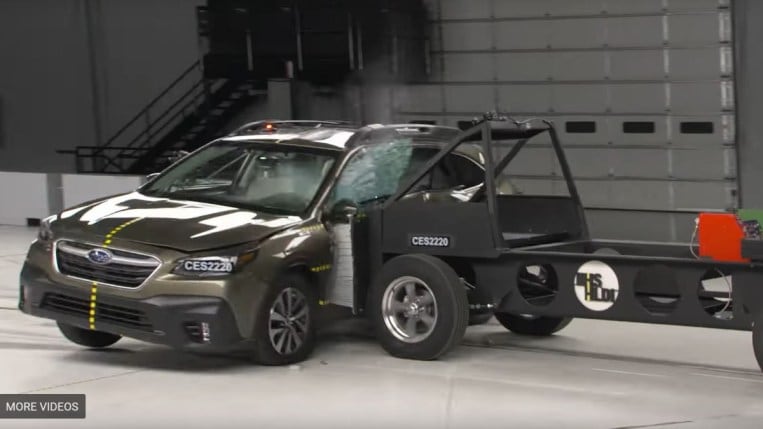 Now, consider this screenshot from the Institute’s video of the Malibu’s test:

Our verdict? These are not the same tests. The Outback’s performance may be an outlier simply because it’s out of place in a test group full of sedans. that means they do not sedan achieved a score higher than Marginal.

Don’t Panic — Everyone Gets Better When the Tests Get Harder

The results are disheartening, and we’d consider them when car shopping. But there’s a silver lining to cars bombing the test.

The IIHS has driven change in the past by strengthening its standards. Just last year, many automakers made upgraded headlights to standard equipment on new cars rather than as an added cost option — the IIHS announced that cars couldn’t win its highest safety award if they charged extra for safer lighting.

Those awards are a critical tool in making cars safer for everyone. Automakers covet the institute’s Top Safety Pick and Top Safety Pick+ awards and crow about them in advertising. In a competitive car market, automakers compete to build cars safe enough to earn those badges.

The tougher test won’t count toward the awards yet. The IIHS won’t take the new side-impact scores into account for awards until next year to give automakers time to improve.

That’s the point. Now, they have to improve. So the scary headline above is a good thing in the long run. It will likely drive safety innovations.